Terry and the T-Birds, performing as Doc Tictock and the Mistletoe Medicine Show, will be appearing at Santa’s Wonderland just south of College Station every Monday*-Thursday through Christmas, 2018.  Terry (Doc Tictock) and Jody (Deputy Rowdy) will be performing on weekends at Santa’s too!

*On Monday Dec 17th, Terry and the T-Birds will not be at Santa’s. They’ll be in Lake Jackson performing at a private event. 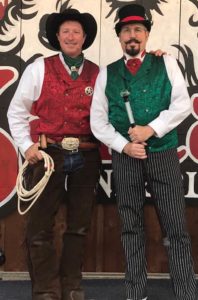 Here are some samples of last year’s shows!

This site uses Akismet to reduce spam. Learn how your comment data is processed.